Iran's most powerful military organization, the Revolutionary Guards also warned local online media of an impending crackdown over their coverage of the protests following the disputed presidential election. The Associated Press reported that the Guards said Iranian Web sites and bloggers must remove any materials that "create tension" or face legal action.
.... 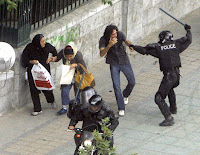 Protestors have been fighting bullets with technology. Wherever we go, we're surrounded by people, like us, filming on their cell-phones, and spreading the word on websites like Facebook and Twitter, which has led government censors to block them. 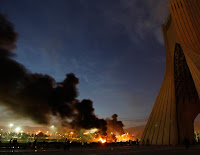 A Mousavi supporter scoffed at the government, saying "the government thinks that blocking websites can prevent the protests [...] but if people want, they can reach their goals anyway."

And the word still gets out, with amateur videos being posted on YouTube and shown to the world. BBC Persian reported receiving videos from viewers at the rate of 5/minute Tuesday.
(da ABCNEWS http://abcnews.go.com/International/story?id=7858575&page=1 )
Pubblicato da la stanza in fondo agli occhi a 13:03